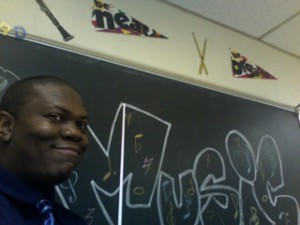 Kerry J. Gilliard is a conductor, composer, adjudicator, arranger, speaker and educator in Prince Georges County, Maryland. A Baltimore native and product of Baltimore City Public Schools, he graduated from Walbrook Senior High School in 1991. He holds a Master of Music in Conducting (Wind Band Concentration) from Messiah College (2019), Master of Arts in Teaching through Grand Canyon University (2013), and a Bachelor of Science in Music Education from Bowie State University (2001). Kerry has been a public school music teacher since 2001 years; four of those years, he taught both instrumental and vocal music at the high school level, directing multiple ensembles (comprehensive choir, chamber choir, gospel choir, a show-style/traditional high stepping marching/pep band, concert band/wind ensemble and jazz band).

In addition to his classroom ensemble work, Mr. Gilliard has been adjudicator for PGCPS’s Elementary Solo and Ensemble Festival multiple years and a clinician for both his district’s in-service meeting, as well as for the Maryland Music Educators Association state in-service.

In college, Mr. Gilliard served as primary arranger, student director and assistant band director for the Bowie State University Symphony of Soul Marching, Pep and Concert Bands. The marching band still plays music he arranged over a decade and a half ago as part of their standard repertoire. He has performed with the Symphony of Soul around the country as well as with the BSU Jazz Ensemble on both alto and tenor sax. He has performed for various musicals produced by the BSU Theatre Department including multiple performances of The Wiz.

An accomplished arranger and composer with over 30 of experience (writing his first arrangement at age 15), he has written for small and large instrumental ensembles with various combinations of wind and percussion instruments, piano and various vocal groupings. Since 1988, he has performed with and directed several church choirs (adult and children), praise teams and has served as a church musician performing on keyboard and saxophone.

Mr. Gilliard has also been a professional dj, emcee and producer since 1991. He has also composed and arranged tracks in the genres of house/dance music, hip-hop and r & b. From November 2007 to November 2011, he served as the house dj for Fourth Friday Fundamentals in Baltimore, MD (http://www.fourthfridayfundamentals.com) playing Christian Hip Hop exclusively. He has cameo appearances on Christcentric member Evangel’s Expository Journey CD. His first solo hip hop project may be released in 2020.

He and his wonderful wife Danielle, also a band and orchestra director and part-time composer, reside in the Washington, DC suburbs. His wife is currently director at his old job (Thomas Johnson) and has improved on the tradition of superior performances he established during his time there. They are both charter members of the Fort Washington Symphonic Winds under the director of Mr. Walter Harley. In his non-existent spare time, he enjoys spending time with his wife, reading books on theology and apologetics and blogging occasionally at Theologically Correct dot Com and BlackCalvinist.com.

This site uses Akismet to reduce spam. Learn how your comment data is processed.